The corner of Division and Elston, right along the river, has been the topic of many conversations since Slow Down! Life's Too Short closed back in 2004. Rumors swirled every few years whether the place would come back to life, and if the colorful, animated facade would remain intact. Now, after months of construction, it looks like something new is emerging.

Co-owner Mike Mabi, part of the SocialLight Group ( Mabi,Denis Stasic and Eddie Leenheer), in partnership with Martin Hogue and Jimmy Sanfilippo, revealed that the new venture, Estate Ultra Bar, an upscale concept for "social dining and drinking," is slated to open in early 2012. This is the team's first owned venture, but they've had collective experience in managing nightclubs, bars and marketing within the hospitality industry.

The concept was originally planned for the old Ontourage space on Ontario, but when things turned sour they simply dialed up the number on the For Rent sign on the door of 1177 N. Elston. Although there had been much interest for the space, the building's owner felt their concept worked the best. Given the building was shut down for city code violations in 2004, and by this point half of the structure was sinking in the river, the owner invested $1.5 million dollars in fixing the building before leasing it to the team to do a complete gut rehab.

Once renovations are complete, the space will boast multiple different rooms including an atrium with fireplaces, a private trophy room and a living room with views of the river. There will be one large wraparound bar that will serve the space with 28 beers on tap. In the spring, Estate will open its outdoor spaces, a rooftop sky deck and sky lounge, gazebo, terrace and boat dock with additional bars added. 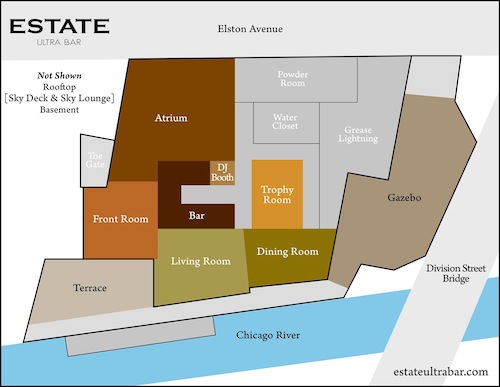 Chef Chris Turano, who most recently came from the private club at the University of Chicago, will execute the menu of shared plates, what the owners have dubbed, "playful American cuisine." Menu items include: lobster mac & cheese with a Goldfish cracker crust; petite pork belly sammies with Goose Island root beer and soy-glazed pork belly; and a cake pop flight that includes one with chocolate frosting and pop rocks. In homage to the Life's Too Short burger mascot, there will also be a burger on the menu made with ground black angus short rib, brisket and chuck with Dunbarton cheddar.

The kitchen on their initial layout is dubbed Grease Lightening. Why? "As you can see our kitchen is shaped like a lightening bolt. Most of our plates are shared plates, and our kitchen's goal is to get plates out fast, said Mabi. "Just as fast as Danny Zuko's car in the movie Grease." Guess they'll have to get put to the test once it opens.

Iliana Regan Officially Departs From Her Michelin-Starred Restaurant in Chicago

By Ashok Selvam and Aimee Levitt

By Ashok Selvam and Aimee Levitt