...And now the latest from your intrepid shoppers over at Racked Chicago, covering everything you need to know about the city's shopping, style, and retail from the sidewalks up. 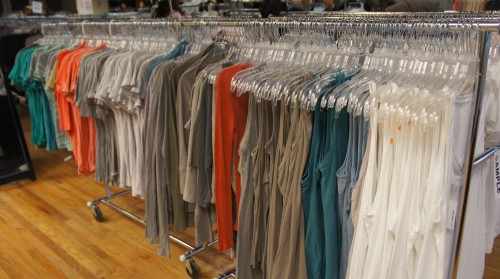 GOLD COAST - Starting today and going through the weekend, the James Perse Sample Sale is open to the public. We woke up early and relished in the healthy selection of comfortwear. We've got the full breakdown of what you'll find at the sale.

RIVER NORTH - Earlier this week a popular mall Santa had some very special furry guests on his lap. In partnership with Microsoft, the Shops at North Bridge hosted "Santa Paws."

WISCONSIN - If you feel like going shopping at Lowe's and Wal-Mart in Wisconsin look no further for pointers on what not to do. This week a man was convicted of disorderly conduct for going on a planking spree around town.

GOLD COAST - We've heard rumors lately surrounding the still vacant Jake space where Isaac Mizrahi was once rumored to open. We've also heard about the still vacant storefront of the now divided space that was once Barneys. Join us as we discuss the news on Rush and Oak.