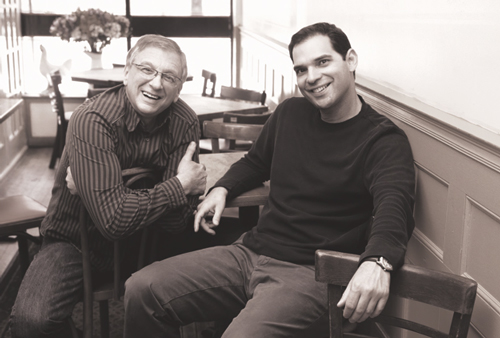 Having one hot spot on a pretty populated street is never a bad thing, but when you want to expand and open a new location on a street that's somewhat emerging, you always take a risk. But that's exactly what m. henry owners Michael Moorman and Jorge Aviles did when they decided to open m. henrietta, a larger version of their quaint brunch spot on Granville in Edgewater. Eater talked to Moorman, who admitted that it's been a tough year, but that he and Aviles are sticking it out and really want to help make that part of the city a much more vibrant dining and shopping destination.

Has it already been a year since you opened m. henrietta?
[Laughs.] It's been a rough year ... for everyone in general. It was last September that we opened up. We were a little behind schedule and then we opened and fall hit. We've been cutting our teeth in that new neighborhood. It's Edgewater and it's not Andersonville. It was a little sketchier a year ago than it is now. That's part of the reason why we moved in. The city asked us to come in and move there. They made us an offer in terms of a space and a deal with different things that we said, "OK, we can do this despite the economy." And we did, though it seemed easier a year or two ago. The way things have been – we've done fine. Our breakfast and lunch has been good. Our dinner has been slowly growing and a lot of people don't know we do dinner. We do a really good dinner.

How was the actual opening ... did things run smoothly?
It went pretty smooth. More with the neighborhood; it was cutting our teeth in that neighborhood. We were the first new thing to come into Granville in a while. People over there were already our breakfast and brunch customers at m. Henry. But we still had to prove ourselves. People were really grateful when they heard we were coming. They said they knew their property values would come up. Lickity Split said they signed a lease because they knew we were committed to the neighborhood.

What was the initial motivation for opening a second spot?
The area needed it. It's why we even did dinner. We would've loved to come in and do the same thing but it came down to us saying, "If we're going to do this, what does the neighborhood need?" We live in Rogers Park and drive into Edgewater and south to go to places to eat and we were yearning for places to eat. There were no good dinner places that were affordable. This was proving ourselves as an everyday all-purpose good neighborhood bistro and we had to accept that we're good at that. That takes people a little to get used to but I think we've actually done that. We do exceptional food at exceptional prices as best as we can.

Do you think you'll open more restaurants?
Not at the moment. Our biggest thing at this point is in the spring we're going to add on a garden patio for m. henrietta. I've been watching around Morse and Glenwood and some spaces in Andersonville that we've looked at, but right now we're still trying to do good with the two that we have. We do have m. henry Design and Consulting that helps other restaurants get up and running. Anteprima ... we did all the design and the name for them.

Where will the patio go, on the sidewalk or in back?
We'd be doing it in the back and we already have an area that's been designated. We'd like to do something more permanent that we can do almost year round and heat it.

So, does it feel like it's been a year?
No. It's gone fast. And we're still growing, which in hindsight we've been really fortunate. But it feels a lot different than it did a year ago. We helped make the neighborhood more user friendly and it's a little less scary over there.

Are you seeing it as more of a neighborhood spot or as a destination?
Both, and m. henry is both. Luckily as a destination it's not a hard parking area. Granville is more user friendly than even Bryn Mawr.

What's the best thing about having a growing restaurant "empire"?
We're lucky enough that our two reatsurants are only a mile away from each other and we have a lot of crossover customers. And we've had a lot of involvement with the community because we also live nearby. My long-term goal is that I yearn for a place in Italy, but if I can't live in Europe I'll bring a little bit of that lifestyle to my everyday life here. We're trying to make it feel like we're doing a little bit extra and to pay attention to the details not just with the food but with everything: good people and good vibes. It's a juggling act.