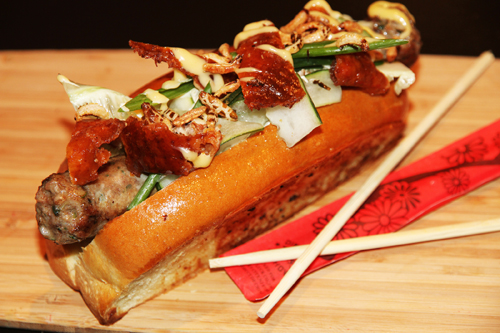 The $9 Peking Duck Dawg has already been available at Franks 'N Dawgs since Tuesday and it'll be on through Sunday so there's plenty of time to get one—and then go back for another. The dawg, a sesame duck sausage, pickled cucumber, hoisin aioli, scallion, crispy peking duck skin and puffed rice, was created by chefs Alexander Brunacci and Joe Doren.

"When I think of Chinese food, meat wise, I think of ducks hanging in the windows," Doren said. "One of my favorites things about Peking duck is the really crispy skin and the sweetness to it. I got the duck skin and we're we're rubbing it with the plum sauce. Whenever you get the peking duck you have the pickled vegetables with it and some kind of sesame. Peking duck is out of this world good."