Share All sharing options for: GM Chris Gerber Talks About the Aviary

This is The Gatekeepers, in which Eater roams the city meeting the fine ladies and gentlemen that stand between you and some of your favorite impossible-to-get tables. 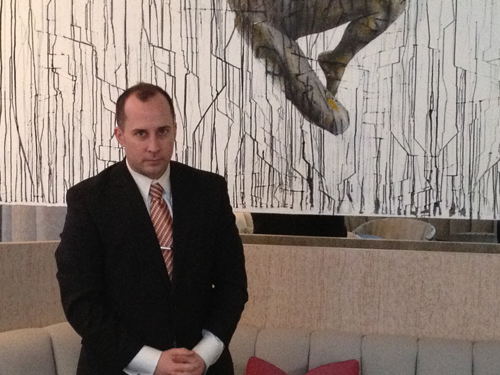 Not that many people can say they've watched the rise of one of the world's top chefs, but Chris Gerber, general manager of The Aviary, has known Grant Achatz since his days at Trio—just before he shot to global fame. But before Gerber managed Trio with Achatz, he worked alongside two other top chefs—Eric Aubriot and Carrie Nahabedian. His path then led him to Tru for about nine months before he again joined Achatz as the opening maître d at Alinea. After a year, he left to work at NoMI for about five years before doing a short stint at Publican, then back to NoMI Kitchen. Gerber got a call to join the team at Aviary in early October and he's been there since.

Why did you decide to come work at Aviary?
I've remained good friends with Grant, so I've always wanted to come back. It was more about what role would I have and everything was fully staffed [when it opened]. I wasn't sure if I wanted to come back over here when they first opened in management, but then to come here and be GM and help make Aviary better was really enticing.

How do you make it better?
What they wanted me to do was bring a sense of customer service, but rather more than that was hospitality, a real feel of coming into someone's home and having fun in a lively atmosphere. The Alinea culture, while it works great there, it doesn't entirely transfer over here. We are making great culinary cocktails, but it is somewhat of a bar and we have to marry the two. It's a place for grown ups. We're serious, but we like to have fun.

It's 8pm Saturday. What's the wait for a table?
It's going to be anywhere from a half hour to 45 minutes, quite honestly.

How to most people react to the time quoted?
I think it's somewhat expected. I think sometimes they're expecting a longer time quoted to them. When we first opened we had a line around the block and people still see that as the case. While the line is long we can keep it moving forward. We've gotten better at service and giving people the experience on a shorter time span without compromising their experience.

You take limited reservations though, right?
Basically it's an email address that you can request a reservation on the same day for 6, 8 and 10 o' clock, going up to 12 if people want. And we encourage that because that does sort of guarantee you a spot instead of walking up and having to wait. Because of the reservations and what people have heard about it and with the ticket system at Next, people feel it's difficult to come in, but while it's not always easy to walk up, sometimes you'll be whisked right in.

Where can people hang out while waiting?
Outside when it's been nice. As of [last week], we started bringing parties in to fit them into the entryway. We can fit two to three parites there. We are going to get one of those canvas doors and we do have the propane heaters outside. Generally in the fall people were waiting outside and they were happy. And we had the patio open.

Can people just hang out in the front area or will everyone eventually get a real seat?
Absolutely. We call that area the Gallery. We'll sometimes bring multiple parties in and if there's two parties of two we'll let them stand together. That's a way station for them to get sat. If they want to just have one cocktail and see what the chefs are doing that's a perfect vantage point.

What about the Office, the private downstairs speakeasy?
To experience it, people really have to inquire about it—it's a first-inquire, first-served sort of atmosphere. We don't take reservations for it. It does fill up quite quickly; there are only four spaces to place guests. Guests can go down and have one cocktail, but they can also be down there for five hours.

What's the most outrageous request you've heard to get down there?
There really hasn't been an outrageous request. Usually [people have] heard about it and they'll inquire with their server, who talks to me or Marlon [Shkaidy – another manager] and we'll see what sort of room we have. There's not a huge air of exclusivitiy to it, but it does speak to a certain clientele. Not everyone will go down there and enjoy it as much as other people. Up here there's something for everyone.

As a customer, is there anything I can do to make my wait shorter, like cash or gifts?
No [laughs].

Talk about your favorite types of customers.
I know this sounds strange and antithetical to what peope think in service ... I want guests to know what they want. I'd rather someone say, "this is what I like, this is what I'm geared toward," and then we can get them that or lead them in the right direction. I like guests who are matter of fact. But other guests are fun and if they're open to the experience, we'll craft the experience for them. Those are people you can take on a fun ride and get them something they might not otherwise choose for themselves. Or take them into the Office and talk them into the cocktail with parsnip and rum and it's become the most popular cocktail.

What about celebrities? I know a number of people, like Zac Efron, have come in.
I think that for us we treat them with an air of ... in a way we pretend we don't know who they are, but we do know who they are. But to pretend we don't would be a mistake, but to be overly effusive and overly accommodating to someone who probably gets that in their life, they want to come out and feel like a normal person. We are sensitive to their privacy and make sure people aren't harassing them. We are also very sensitive to where we place them in the room. We had a famous rock icon in the other night and we sat him in a place where they could get a sense of the room and not be bothered by people. Or we take them down to the Office.

How do you deal with VIPs when there are no tables left to give?
That wouldn't happen. We know who is coming and when they're coming and we just make it happen. I'll chisel a table out of granite with my bare hands [laughs].

So let's say someone, like a local athlete perhaps, comes in and wants a simple vodka soda. Do you make it?
That's on a case by case basis and that's happened before. If it's me, I'd maybe suggest a gin and tonic with our housemade tonic. I'd talk them into branching out into something and making them drink the kool aid a bit without forcing it down their throat instead of outright saying no. I don't like to say no.

What's the one Gatekeeper tool you need to do your job?
A love of people.

When you're not at The Aviary, where are you drinking and eating?
Drinking would be the Whistler, Sable, Barrelhouse Flat. Eating would be avec, Publican, Bristol and, recently, Telegraph.