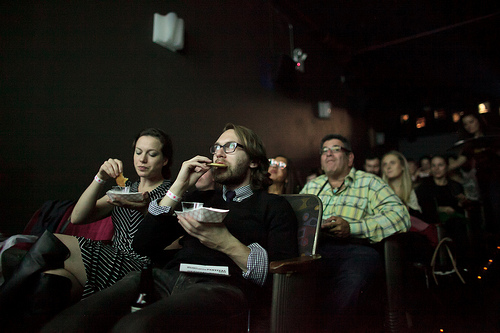 Film and food lovers alike will be able to taste the big screen again at the 2nd annual Chicago Food Film Festival. Taking place from November 18 to 20 at Kendall College and Intelligentsia Roasting Works, the event will offer guests a selection of foods that are featured in the films being presented. Chef Art Jackson of Pleasant House Bakery and Pleasant Farms will kick off the festival's opening night with a 'Farm to Film to Table' session highlighting the tastes of a farm fresh harvest. Alongside several short films will be dishes from Pleasant House Bakery, a sustainable ice cream sundae bar from the Cruze Family Farm and more.

The Doughnut Vault will take center stage the following afternoon with donuts fresh from their shop and a short documentary delivering the sights and sounds of the sweets factory. Accompanying them will be several other films featuring fares such as junk food, the expresso shot and coconut macaroons. Later that evening, 'The Great Chicago Shuck 'N Suck' will include a food porn party and an authentic lowcountry oyster roast on the banks of Goose Island with more than 7,500 South Carolina oysters brought over from the coast. The ' 2011 Awards Ceremony Lunch' will wrap things up on November 20 by featuring the festival's winning films and a special screening of director Jason Lam's "How to Make a Turtle Burger," a short film about a bacon-wrapped turtle burger.