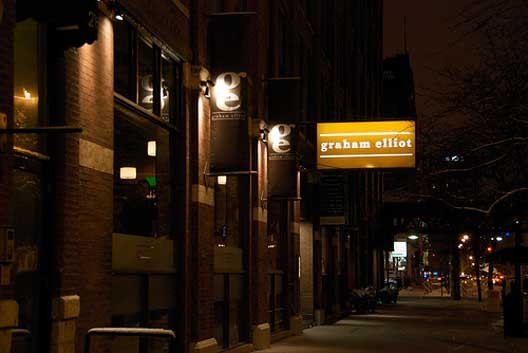 The third incarnation of graham elliot has become a “thoughtful place,” writes David Tamarkin. The persimmon cake and pumpkin soup lean on its sweet flavors, while the hen is heavy on savory in a “miraculous way.” The dish’s earthy mastutake mushroom shavings complement the hen’s taste for an all-around “classy meal.” [TOC]

Deviating from your standard fare, Michael Nagrant visits the new Mex-Italian restaurant Al Dente from Spiaggia and mk veteran Javier Perez. Every protein is cooked perfectly, as the lamb chops are “medium-rare lollipops ? succulent-to-the-bone” and the shrimp in the queso fundido are “plump, briny, bursting sea jewels.” Likewise, the cheese is so pliant that Nagrant can imagine a “Lady and the Tramp” noodle scene occurring. All of this leads to a cuisine mix he calls “mostly glorious.” [Sun-Times]

Julia Kramer spends some time trying out two new chain restaurants from Texas-based corporation Consolidated Restaurant Operations Inc. While she finds the décors "chic" and the prices higher than your average chain, the food still fails to impress. At Cantina Laredo the brisket inside the tamales is dry, the ‘top shelf’ guacamole is anything but and the premium for service is wholly underwhelming. “Unfortunately, my imagination of what [tableside preparation] would be like was far more exciting than the reality,” Kramer states.

Over at III Forks, the giant shrimp are tough, the crab cakes are unappetizingly wet and the scallop overcooked. Fortunately, her New York strip has a nice crust and is cooked to tender perfection. The showstopper though is the chicken-fried prime rib, as Kramer likens the three slabs of heavily peppered fried beef to a monstrosity out of "Woman v. Food." [TOC]