Share All sharing options for: Seasons to Close After New Years Eve; Re-Conceptualize 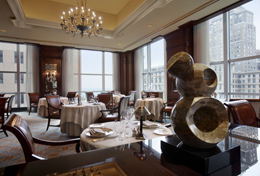 Chicago’s fine-dining landscape continues to evolve, as Season’s Restaurant will close after service on New Years Eve. The 22-year old restaurant inside the Four Seasons hotel will become a junior ballroom and private event space, with the rest of the area being renovated to create a new, more casual dining experience. “It will be more approachable, more fun,” Kevin Hickey, the restaurant's executive chef, told Steve Dolinsky on his blog. ”You’re gonna have the same passionate level of excitement – great quality, locally-sourced ingredients – but it will be at a more accessible price point.”

Seasons will be another in the line of restaurants making the move over to casual dining. Within the past year alone, the Michelin-starred NoMI became NoMI Kitchen, the Pump Room transformed itself into a more democratic experience and Carlos’ has also stated its intention to close and re-conceptualize. But Hickey says the Four Seasons will still be in that air of sophistication that allows diners to celebrate a special occasion, while also being able to order steak tartar in jeans. “By having more fun we’re also going to get that younger demo too,” he said of the new restaurant. The targeted soft opening is for mid-February.
· Four Seasons “Re-Concepting,” Chicago’s Fine Dining Landscape Continues To Evolve [Steve Dolinsky]