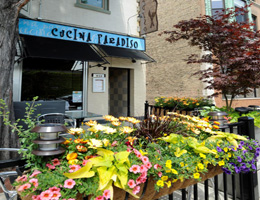 If you're in the mood for some contemporary Italian fare and a glass of wine then head over to Cucina Paradiso. The family-owned eatery in Oak Park will be celebrating its 16th anniversary next week. Despite almost being shuttered by a kitchen fire in 2007, the restaurant was rebuilt and has since become a neighborhood mainstay. Led by brothers Anthony and Nick Gambino, Cucina Paradiso has been recognized by food critics such as the Michelin Guide, Zagat and Chicago Magazine.

To commemorate the milestone, diners will receive 30% off their checks between 5 p.m. and 9:30 p.m on November 16. Guests will also be treated to complimentary cupcakes courtesy of Reuter's Bakery in Galewood.