From Uva to Vera

Share All sharing options for: From Uva to Vera 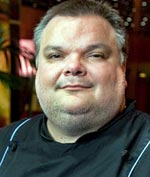 So it looks like last week's legal kerfuffle has moved chef Mark Mendez to change the name of his forthcoming Spanish-inspired West Loop restaurant. It was originally to be called Uva, but after a New York-based wine bar of the same name sent a cease and desist (they apparently own the rights to the name nationwide), Mendez decided to change the name to Vera to honor his grandmother and as well as pay homage to the La Vera region in Western Spain known for its sweet paprika. [Facebook]