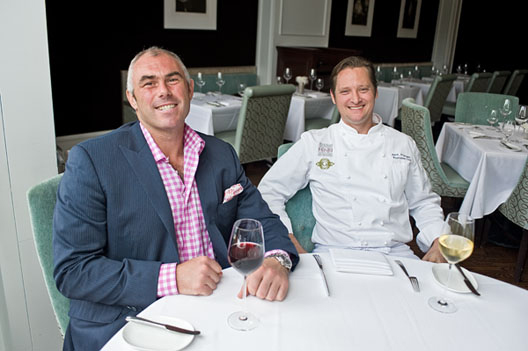 Opening a high-end restaurant along south Michigan Avenue in an area frequented by tourists and their kids hitting the Art Institute and splashing about in the Crown Fountain at Millennium Park may have been seen as risky by some. But Billy and Catherine Lawless and chef Dirk Flanigan, who already had success with the high-end Irish gastropub, The Gage, next door, were willing to take the chance on opening Henri.

The team opened the stunningly gorgeous Michigan Avenue-facing restaurant with the help of GM Terry McNeese, head bartender Clint Rogers and sommelier Shebnem Ince, who was named one of the top sommelier's in the country earlier this year by Food & Wine for creating an almost-entirely biodynamic wine list. And so far, that chance to open seems to have paid off.

Congrats on the first year. How does it feel?
Lawless: It's been really rewarding. It wasn't the safest play, the concept or timing, but we've grown as a resturant and group. The execution is superb. I think Dirk has found his stride.
Flanigan: What happens whenever you open a place, you hit the ground running. In this day of hyper-critical reviews and me being hyper critical and sensitive, you set out to make everything perfect. With that comes a lot of conversation and on-the-fly communication. What happens a year in is the cooks are starting to understand what the hell you mean. Then you go through process and through each little detail; it takes time and patience. Once the staff knows what you need, you can start focusing on the now and look at the future.

How has the first year been?
Lawless: I think there was a lot of relief when we opened that we'd have some income [laughs]. In saying that, I always believed in Dirk and the concept. But then the real work started after we opened; you had to create the buzz on a daily basis. We couldn't have done better in terms of our opening reviews. The biggest lesson was figuring out our clientele and figuring out what they want while also keeping our creative spark.
Flanigan: On an emotional level, it was kind of a roller coaster. You're putting everything into it, doing these refined plates and have this beautiful dining room. If a bad review comes out, you want to take that and stab it into your cooks. Billy has put a lot of faith and responsibility on me and you learn from the bad reviews and the take away is that every plate is supposed to be the best plate the cooks put up. There's a lot that goes into that. It's been great and rewarding and satisfying and disappointing ... the gamut.

Does it feel like it's been a year?
Lawless: It's gone so fast.
Flanigan: It's gone really fast.
Lawless: We're getting ready to plan our winter menu and New Year's menu
Flanigan: I'm stil thinking about St. Patrick's Day.

When you opened the Gage, did you know you wanted to do Henri?
Lawless: When the opportunity to acquire the space next door came up is when it really came into focus. It was a long process. We were negotiating with the building owners for like 18 months. I remember that Dirk did a tasting back in 2008 for the Henri menu and some of those items, like the Dover sole, are on the menu. We were thinking about Italian, but the room was too small.

What is just lucky that the space opened up next door?
Lawless: It was an administrative office for Roosevelt [University]. Potbelly wanted to do a concept there and I didn't feel it would be good for us to have it beside the Gage. The owners were happy to have us. And to have two restaurant spaces on Michigan Avenue side by side is a real estate opportunity that I'll never have again.

What was the initial motivation for opening a second spot?
Lawless: Obviously with people like Dirk it's important to keep them challenged and they're really creative. I'm lucky that I have a team that helped put the Gage on the map. It helps to keep Dirk motivated. And Sheb, she got really re-energized by the Henri concept especially when she started focusing on the biodynamic wines. The real challenge is to keep your team motivated and, of course, to generate more income [laughs]. The opportunity came up next store it just made sense.
Flanigan: The initial menu changes were difficult, just in terms of my creative process, if I start to write a menu for Henri half of the items in the beginning would really be for the Gage. The seasonality for my head really takes over. I can make a list and divide it into two different categories and this is what will happen with white fish at Henri and at the Gage, same with duck. Having a place where my friends could afford to eat in the dining room was a motivation ... and that was the Gage. Getting to eat finer dining food in a casual atmosphere was the Gage. It was fun to take things and re-refine them, because the Gage has a lot of rusticity to it.

How did you decide on the cuisine?
Flanigan: It's a contemporary French and American resturant. The initial story line was that it was classic and contemporary French, but a lot of the menu was based on things I remember eating as a kid when I would go out to dinner with my father, like escargot. Like the old school thought process of the Wellington. That was the idea, but then also getting into the plates du jour and creating a culture of that. The techniques we use at Henri are very French

You mentioned you had wanted to do an Italian spot, so why French?
Flanigan: Based on the size of the room, unless you're going ultra high-end Italian, size was realy the deal. We couldn't charge enough or generate enough income. I hope Italian is still something we can do.

How was the actual opening? Did things run smoothly?
Lawless: That first night, the hood contractor had set a thermostat too low and the fire suppression system went off.
Flanigan: With the exhaust, things are rated. There's a hood above the range that sucks out all the grease. If there's a fire, it sucks it up into the hood and then drops a damper and hopefully the fire goes out. These dampers have different ratings and it was set at like 160 or 180 degrees and that is nothing in a kitchen. Then it dropped. We had lamb for two on the menu and everyone ordered it. There was a ton of smoke pouring out of the oven and we were coughing. There's all sorts of indicators and when you get the first, it's a matter of when it's going to go.

What has been the most challenging thing?
Flanigan: For me, personally, it is cost. We have the Gage, where volume really takes care of things. You can take a loss on some items and make up for it elsewhere. With Henri, where the menu focuses on luxury, it's hard to price things without pricing yourself out of the market. You can price something like lobster under $40 and still give them a good meal. Is it expensive based on value? No. Is it expensive based on dollars. Yes.
Lawless: For me, it's to not lose focus on the Gage and that it really facilitated Henri. And to keep Dirk also focused on the Gage, too. The natural tendency is that it's the new thing on the block so it's easy to focus on that. In some wasys, it has re-energized me at the Gage. You can't ever take your eye off the ball. My last look is the guests' first look.
Flanigan: Something else is that I thought I'd be able to jump back and forth more in less time. I thought I'd be able to jump back to the Gage in six months, but I'm really just now getting back into being able to do that. The last few changes on both menus, the food is now better than ever. I think the Henri menu is the best it's ever been and a lot of that comes from the staff being more comfortable and the sous chefs really understanding what you mean, and also keeping themselves challenged and creative. At Henri you have to be more mature in your decisions and execution. There are some things that are progressive, but some things are really conservative like the Dover sole. It's been fun for me, but I'm also trying to balance out between luxury and reality.

Do you think you'll open more restaurants?
Lawless: I'm becoming a dentist.
Flanigan: He's using this space. [Laughs.]
Lawless: It all depends on the right deal and we definitey want to do more things. It depends on the right real estate in the right neighborhood. Right now, the other locations I've looked at, the build out costs were just exorbitant.