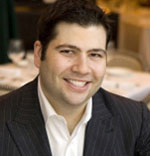 Congrats are in order for Paris Club's RJ Melman, who was named Restaurateur of the Year by Share Our Strength. In a ceremony earlier this week, Melman received the top honor for his commitment to the organization that strives to end childhood hunger in the United States. As chairman of the 2011 Taste of the Nation, Melman doubled the event's revenue to more than $250,000 and helped bring in tens of thousands of dollars in new sponsorships and donations. [EaterWire]