Share All sharing options for: Mike Gebert Officially on at Grub Street 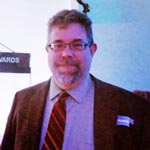 Congrats to Mike Gebert, who is now officially the new editor at Grub Street Chicago. Gebert had subbed for Nick Kindelsperger from time to time and was acting as the interim editor for the site after Kindelsperger departed two weeks ago. But now Gebert, who also has the blog Sky Full of Bacon, won a James Beard award for his Key Ingredient series for the Chicago Reader and shot Eater's five-part mini-series on the opening of Next, is taking the lead full time. Gebert's work thus far has already been impressive and it'll be exciting what else he brings to the table. Congrats, Mike! [Grub Street]