Next Up for Laurent Gras

Share All sharing options for: Next Up for Laurent Gras 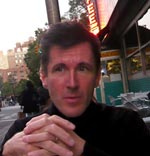 When he left Chicago a year ago, he had just earned three Michelin stars. Now, acclaimed chef Laurent Gras talks to Eater National about the next phase in his life. The former L20 chef wants to focus on Asian and French cuisine, but said it'll be an evolution of what he was doing in his Chicago kitchen. He said he wants to "cook for great food, because you are enthusiastic, inspired, and know there is potential in the restaurant," and not necessarily focus on getting stars. As for the rumor of a rift between him and former partner Rich Melman, "If you read anything that I have said, nothing is negative. I have nothing bad to say." [~E~]