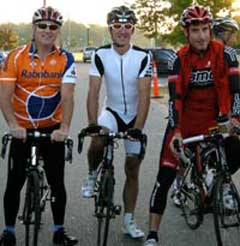 It's no secret L20 Executive Chef Laurent Gras is in great shape. He's been named one of the world's fittest guys by Men's Fitness and one of Food & Wine's fittest chefs. He bikes nearly 400 miles every week (even in winter and we all know how brutal that can be in Chicago) and last weekend teamed up with chef Ken Vedrinski of Charleston, S.C.'s Trattoria Lucca to ride the 100-kilo Ride for Hope charity bike ride in South Carolina.

The experience included pro cyclist George Hincapie, whose BMC team will compete in the 2011 Tour de France. At the Ride for Hope after party, both Gras and Vedrinski, who was also named by F&W as a fit chef, offered up their culinary services to Hincapie's team during the tour, each cooking for a week. Gras, no stranger to a challenge, said he'd cook during the week the Tour travels through the Alps. Cooking at that altitude? Now that's hardcore.