Urban Teams With Trader Joe's; Wal-Mart On The Corner

Share All sharing options for: Urban Teams With Trader Joe's; Wal-Mart On The Corner

And now, the latest from Racked Chicago, covering shopping and retail from the sidewalks up. 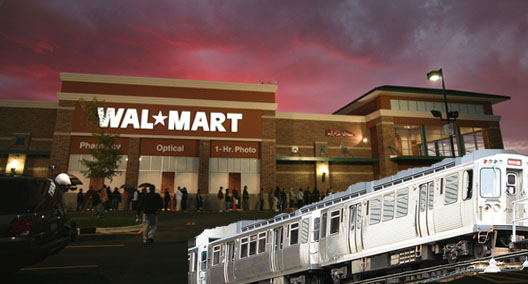 1) North Side: In addition to the Trader Joe's and Domicile coming to the Broadway-Clark-Diversey intersection, Urban Outfitters will now be joining in on the fun, opening its eighth location in the former space of Pier 1 Imports. From serious housewares to...sarcastic housewares! Those ironic faux-vintage dishes have never looked so good.

2) Everywhere: Wal-Mart is coming in all shapes and sizes, and they will soon be inescapable. 24 new stores are set to pop up around Chicagoland, and some are even going to be tiny grocery stores small enough to fit onto blocks you hoped they'd never be a part of. There goes the neighborhood...

3) Mag Mile: Ann Taylor, which takes up the ground floor of the former Viacom store, will be clearing out in 2012. Its next door neighbor Levi's has also gotten bit by the disappearing bug, and will be putting a third of its store space up for rent. Speculation has already begun for who will fill the spots — got any ideas? Maybe they'll build an enormous Garrett's factory, just for cheese-flavored fun.